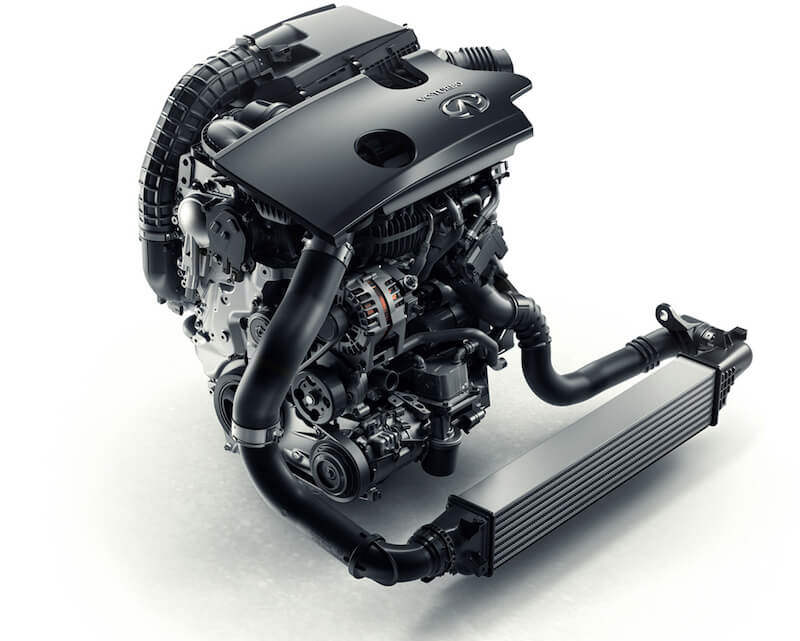 INFINITI’s all-new 2.0-liter VC-Turbo (Variable Compression Turbo) gasoline engine is the world’s first production-ready variable compression ratio engine. Shown for the first time at the 2016 Mondial de l’Automobile in Paris, the four-cylinder VC-Turbo promises to be one of the most advanced internal combustion engines ever created.

With the ability to continuously transform, INFINITI’s VC-Turbo technology uses an advanced multi-link system to seamlessly raise or lower the stroke of the pistons, detecting the car’s driving condition and driver inputs, and instantly selecting the most suitable compression ratio.

The engine is able to offer any compression ratio between 8:1 (typical for high performance engines) and 14:1 (used by many manufacturers for high efficiency).

The result is an engine that combines the power of a high-performance 2.0-liter turbo gasoline engine with the torque and efficiency of an advanced diesel powertrain – without the equivalent emissions – offering a compelling alternative to similarly-powered four-cylinder diesel engines. The VC-Turbo engine will be comparable to certain six-cylinder gasoline powertrains for performance, while significantly outperforming them in efficiency.

“Vehicle engineers believe that a breakthrough in internal combustion technology would come from mastering the variable compression ratio. INFINITI was the  first to bring this technology to the market in 2018. This new generation of powertrains will help our global growth and expansion of the INFINITI product portfolio.”  Roland Krueger, President of INFINITI